skip to main | skip to sidebar

This Is Why Ya Don't Throw Snowballs In a 9mm House!

I guess this NYC cop was pissed off when some fun-loving New Yorkers threw snowballs at his Hummer. So pissed off, in fact, that he was compelled to brandish his firearm and bully the crowd with his "authori-tay." The guy even called in backup. You'd think he was coming under fire from an insurgent ambush or something.

I wonder if this might be the sign of a state-wide trend. When I was in high school, my friends and I got into a big snowball fight in the middle of downtown Buffalo, NY. We were teenagers. It was snowing out. You don't need a Ph.D to know that, the first thing you do when good packing snow falls to the ground, is start balling it up and pelting your friends and family with it. But in no time at all, a police cruiser pulled up with its lights on, and the cop made us break it up. When we asked him why, he said, "Because somebody might get hit." One of my wise-ass friends replied, "Well, isn't that the point." But it was all over. We trudged on to the subway station, our fun times snuffed out by The Man.

New York police must have a zero-tolerance/eliminate with extreme prejudice policy on snowballs. Heaven forbid somebody get ice in their hair or suffer something equally painful, all because some people decided to break up the monotony of the day with free-spirited, youthful hijinks.

From bow to stern, and back again!
- Morning Gum 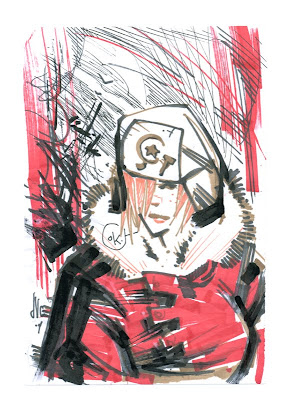 "No one noticed as The Soviet gave the whispered 'all clear' to her blood-thirsty brethren, waiting patiently offshore in their sleek, shark-swift galleons..."

Red sky at night, sailors delight.
- King Gum, over and out.
Posted by Dave Crosland, aka King Gum at 8:31 AM 1 comment: Links to this post 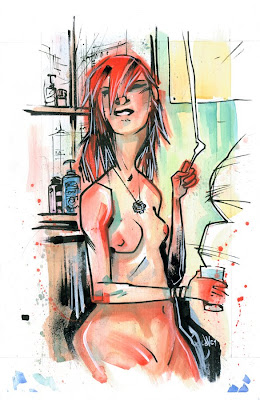 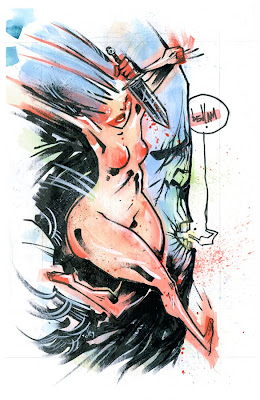 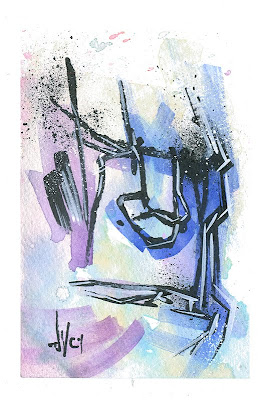 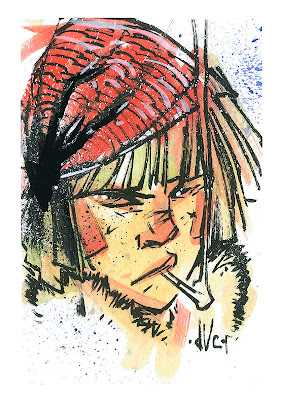 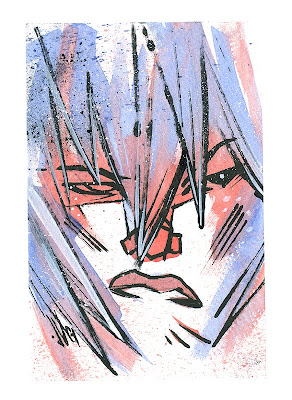 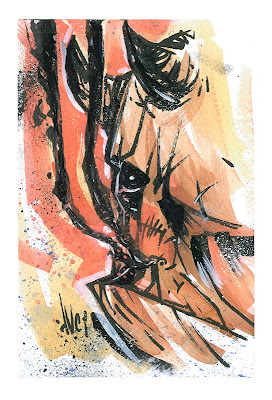 These six, brand-spaking-new pieces will all be on display in Gallery1988SF's PAPER PUSHERS exhibition, which opens up TONIGHT! It's their annual group show of works created on paper. My submissions display the new "King Gum" style I've been developing in my paintings, sketches, and drawings. Feels nice to finally get some of this stuff out into the world!

I'll be in attendance at the reception, along with a good number of the artists involved. Come kick it with some real live creative folk, and get your Holiday swerve on! I promise not to touch you... unless you want me to.

Nya-ha-ha!
- Dave from the poop deck

ps -- See flyer image below or visit www.gallery1988.com for details! 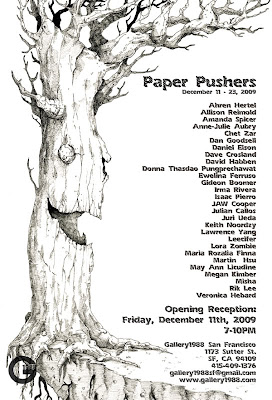 Posted by Dave Crosland, aka King Gum at 9:36 AM 3 comments: Links to this post

The Variants: Episode 5, Guest-Starring Yours Truly! 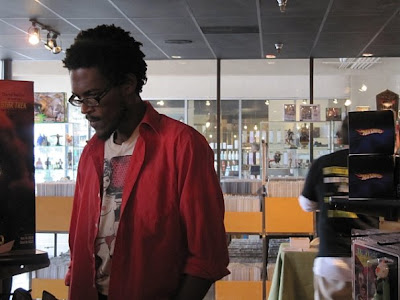 Last month, the fine folks at Zeus Comics flew me to Dallas to be a guest star in their hit web series, The Variants. In the episode, I play a New Age-stoner version of myself, opposite the hilarious Scott Kurtz (PVP Online). As usual, I had a fantastic time in Texas. And shooting the show was a total blast. Many thanks to Rich, Keli, Barry, Joe and the entire Zeus crew for being such gracious hosts and great people to work with!

The episode launches today! Check it out at: thevariants.com

EPISODE 5 OF ‘THE VARIANTS’ PREMIERES DEC. 2

Dallas, TX—Zeus Comics Media is proud to announce the premiere of the fifth episode of THE VARIANTS, the web comedy series that takes you behind the counter of your local comic book shop.

“A lot of comic book stores host book signings, and Zeus is no different,” says series co-creator and co-writer Richard Neal. “But with signings comes the talent, and with the talent come demands.”

Episode 5, “The Signing,” sees Web cartoonist Scott Kurtz (PVP Online, Truth, Justin and the American Way) and artist Dave Crosland (Puffed, Scarface: Scarred For Life) doing a joint signing at Zeus. The staff has to deal with fans, of course, but the real trouble comes from Scott and David themselves. Crosland’s potentially over-medicated personality is easygoing to a fault, and Kurtz is… well. He’s Kurtz.

“No one told me they would be filming,” said Kurtz, in a statement issued by his lawyer. “I am working to confiscate and destroy all footage and persons involved with this episode.”

THE VARIANTS’ fifth episode premieres December 2, with new episodes uploaded on the first Wednesday of every month at http://www.thevariants.com. Journalists interested in setting up interviews can contact Ken Lowery at ken@thevariants.com.